The church in Houston has issued a statement to correct factual errors and misrepresentations that have recently arisen concerning an event that occurred there:

THE CHURCH IN HOUSTON

On behalf of the church in Houston, we are compelled to correct factual errors and misrepresentations in a recent public account that criticized the church’s handling of a complaint against a church member that was made about 15 years ago.  We do not desire to embarrass the author of the erroneous account (Author); however, we do have to clear up the false accusations against Mr. Allen Bayes, which are also being used to implicate the eldership in the church and the local churches in the Lord’s recovery. The account alleges that Allen Bayes, an elder in the church, asked the Author to cover up a case of egregious sexual abuse. This is untrue as are many of the account’s details. Following are the facts we can attest to:

Allen Bayes is a professional who runs a private school and mental health facility that employs mental health professionals. He is a widely-respected expert and resource in dealing with cases of abuse of minors. He is 100% committed to reporting incidents that involve minors to the appropriate authorities and has consistently done so when abuses of minors have come to light. The Author also claims that the local churches oppose psychological counseling yet, since she previously worked for Allen, she should be aware of his commitment to providing professional mental health services to clients when needed.

As Allen’s fellow elders in the church in Houston, we have on occasion availed ourselves of his expertise to help church members or their families arrange professional care.

To publicly name Allen Bayes based on a distortion of facts is a serious matter. Corrective action on the part of the author of this account would be appropriate.

On behalf of the church in Houston: 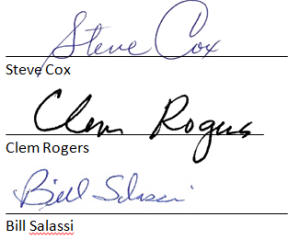